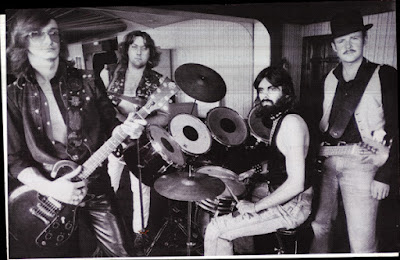 Otra de las tantas bandas que polularon en la N.W.O.B.H.M. y que pasaron desapercibidas, pero no por eso carece de valor!
Su vocalista ( de hecho un "PEDAZO" de vocalista!, Chris McRae, fue el que tan gentilmente accedió a contestarme unas preguntas hace unos años atrás, y me envió también algunas de sus fotos personales con la banda.
01-Can you tell me how things started with Centurion?
- Centurion started when Gaz Yorke and me got together and decided to start a band, at that time I was the Drummer and he and Gaz the song writers. We advertised for others and got Albert and Jez. We got the name by dropping ideas in a hat and pulled out Centurion. We had a singer back then but I cant remember his name. Later we decided that we needed another Singer a guy Dave turned up and we toured with him . He left and I became the Singer and Frontman and Mickey Savage became the Drummer, the line up also changed Bass wise as Jez left after several tours and was replaced with Dave Hannath, this was the strongest line up of Centurion, Chris, Gaz, Albert Dave and Mickey.
02-If you have the chance, do you like to reborn the band? or you see that as a closed chapter?
- No I wouldnt re form it , maybe if there was a good enough reason I might sing a few for fun but it would have to be a really good reason, I think we have all moved on and I personally feel I have produced much better stuff than I did back then, although still proud of what we did  -  touring in a van on self promoted tours and no internet to spread the word wasnt easy and few did it, we did .
03-In your point of view, How you see the actual music business? comparing it with the 70's - 80's in U.K.?
- I am not sure its so much different, people are still out there trying to rip other people off, and it is still a struggle if you are doing original material, so many of the people I used to know back then are now all in cover bands or worse in my opinion Tribute acts, why live your life as someone else ? So maybe thats a change people like to be safe and see and hear what they know, but is that any different to the 70's 80's ? maybe not but lets not ever forget a HUGE influence on me, PUNK ! That, while just as contrived and manufactured in many ways as todays music did have some real people involved and did make a difference , although how much difference is hard to say when you see Punk tribute bands hahaha
04-In your opinion, which was the key factor of the huge emerging of bands in the NWOBHM's period?
- This  may not fit as you would like, I dont think there was a huge emergence of bands, yes there were a lot about but how many were any good really ? how many are still doing it now ? and if they are how many are fresh or just going through the motions of being in a named band ?. I never actually liked most of the NWOBHM and I was always surprised we got caught up in it, I am not sure at the time that we were NWOBHM but have been called it since that time. We didnt think of ourselves as NWOBHM and to be honest I accept it now cos so many people say it, but I never liked most if not all of it, I am not sure where it starts and stops either, I mean Iron Maiden Saxon Motorhead ? are they ALL NWOBHM ? I dont think Motorhead were or indeed are, they started Thrash music I think and Iron Maiden found the God particle and wrote eseentially the same song a lot of times, hey dont get me wrong I love Old Maiden and Motorhead but NWOBHM ? not too sure.
05-Can you tell me if still are you in contact with others members of Centurion and if are you still playing music?
-  I see a couple of members of Centurion , the Internet is great for that, and yes I am playing . I stopped for 25 years and got into doing all sorts including a lot of Television, but I got back into writing and playing a couple of years ago 2011, since then ? I have produced Three Solo Albums and continue to work.
Interview by Ariel G. Ch. (September 2013)